Mark Cuban said this in a video interview. He also added that diversifying will diversify your profits away. Warren Buffett said, “diversification is protection against ignorance.”

If your priority is to see a modest return on your investment in the long term then you should diversify. If your goal is to make a large return in a relatively short amount of time then diversifying will likely not get you there.

Conventional investing advice has a way of altering your perception. People who would gasp at your 1 stock portfolio would at the same time congratulate you on investing your life savings in a new business venture — go for your dreams! Putting it all into your one business is the same as putting it all on one stock. Most people would have been better off putting their money with Jeff Bezos than whatever costly venture they got themselves into.

Diversifying is recommended for every stock portfolio while the status-quo for everything else is to put all of your eggs in one basket. Who diversifies their education? How often do you get the advice to diversify your girlfriends?

I’m not recommending that everyone have a 5 stock portfolio. Warren Buffett also said 99% of people should just invest in an index fund. Most people aren’t skilled or lucky enough though to come out victorious in the stock market without diversification.

A big reason why so many people don’t invest their money in the markets is because it’s something you can put off and not hate yourself for until way down the road. Many have no qualms with owning real estate because it’s almost a tradition plus you need somewhere to live anyway. Just as many celebrate the idea of marriage even with the significant failure rate. Statistically your odds at winning in marriage are about 10 percentage points higher than a typical casino game. Do you feel lucky chump? Well, do you?

Fortunately, the S&P 500 index does not care if you do not take out the garbage or if you gain 70 pounds. Like marriage, it too has its ups and downs but if you stick it out you will be victorious in the end if the last 90 years has anything to say about it. 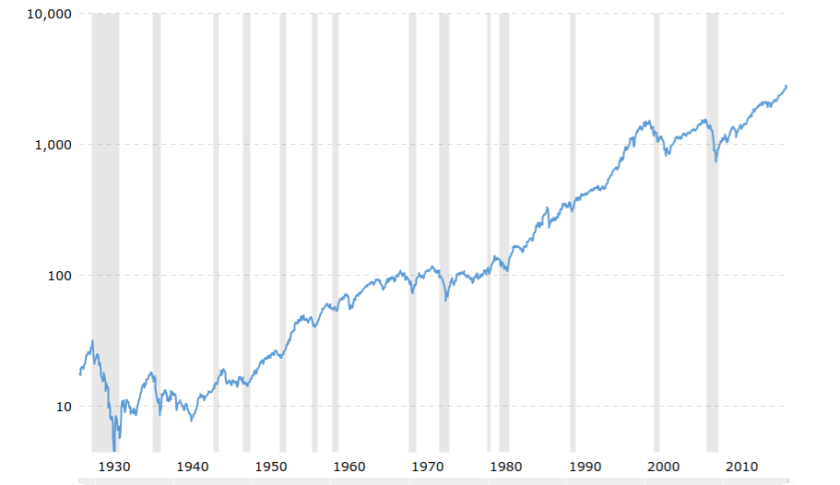 What if I lose all of my money?

The S&P 500 is comprised of 500 of the largest publicly listed companies companies in America. If they fail life is over anyway.

Sure, it’s all been good up until now but how do I know the trend will continue?

The truth is you don’t know for sure but this is almost as close as a guarantee you’re going to get. There are no guarantees in life but you have to side with the most rational decisions.

How much am I going to get back in 30 years?

The answer to this is unknown but you can reasonably expect somewhere in the neighborhood of an average of 5 to 10% annually. Much of this depends on how you invest into it.

The data below shows the annual returns of the index since 1988. As you can see there are many more positive years than negative.

If this hasn’t been compelling enough because I’m just some schmuck blogger then you can put your trust in Warren Buffett. He advises that 99% of people should invest in a low cost S&P 500 index fund such as a Vanguard fund and they’ll do great in the long run. Also, when he dies he has planned for 90% of his money to be put in such a fund for his wife.

Warren Buffett says 99% of people should not pick stocks. If I listened to him I would have a lot less money but at the same time I’m not comfortable with picking 100% of my portfolio’s stocks.

When I look back at the times it made sense for me to pick a stock to buy, those times were few and far between. If you are going to pick a stock I would advocate patience because 99% of us may not be good at picking stocks all the time.

In 2003 a textbook for college costed $120 at the school bookstore. Being cheap and poor I didn’t want to pay that so I searched the internet with the small hope that I might find a deal. This Amazon company had the same book brand new advertised for half the price. I ordered it and it was delivered on time as promised. I thought, wow, this is such a great service. That may have been the sign to buy the stock. Do I have to tell you where the stock is today?

I didn’t come across another company that I thought would be a great buy until 7 years later. Dollarama, a Canadian dollar store, had gone public recently. I remember hearing on the radio about it while getting ready for work. I’ve always thought Dollarama was a great business. Every time I went in there I ended up buying way more than I intended to, and did I mention that I’m cheap. Today the stock has gone 15 times since the IPO. I ended up buying the stock in 2015 and still made a good return.

Luckily, in 2015 I bought in early on Canadian marijuana companies. I had some knowledge about the business and consumers from growing up with a few potheads and drug dealers.

Another Warren Buffett line is buy what you know. Sometimes it’s just that simple. Not always but sometimes.

Do you have any interesting stock picking stories?

Mr. Green is a bastard child with no formal education who is trying to go from underdog to hotdog by achieving financial independence. Something like that anyway.

Follow Diary of an Underdog Trying to Retire Early on WordPress.com